Last week, I bought a beautiful bundle of beets and came up with the genius (if I do say so myself…) idea to feature a food each week. But a spur-of-the-moment weekend away, hot weather and general laziness sent me off-track.

I started with some asparagus. Because if hot pink beet-pee isn’t your thing, why not leap to the next-most-infamous vegetable for bathroom surprises? 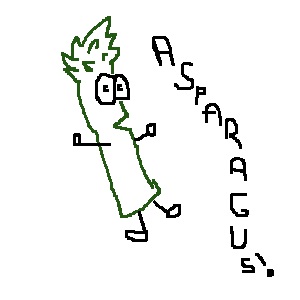 I drew this at work. Some days you’re productive, some days they make you work on holidays. So there.

I was going to make a stir-fry. But then I had an old (err, “aged”?) carton of French onion soup and was apparently convinced a stir-fry would be too much work. You know you’re lazy when stir-frying sounds tough. So I made some egg-drop-like soup with asparagus bits instead…

I was going to put together a fancy from-scratch cream-of soup. But then my prepared asparagus spears just begged to be effortlessly dipped in goat cheese. 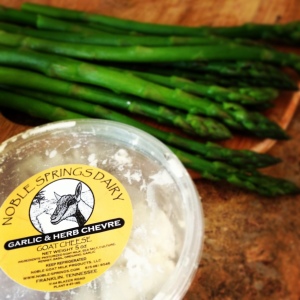 I was going to batter and bake some spears. But I had to work on Memorial Day which left me grumpy, to say the least. Grumpy, and in need of an All-American turkey-dog (or three). And since the mustard and ketchup were out for the dunkin’, well, quick broiled spears got the dip treatment too. 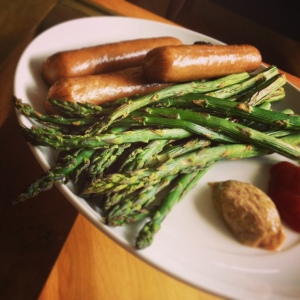 I was going to make asparagus-based fajitas. But caramelized onions take forever. And my cilantro has yet to take off, but my parsley is becoming rather bush-like. So I served up broiled asparagus spears with a refreshing home-grown salad with lemon-parsley yogurt dip.

So, there you have it, some lazy ways to use asparagus. As in, “dip it in stuff.”

What’s your favorite way to use asparagus?

Eats and Treats, Link Ups, What I Ate Wednesday